COLONIZATION OF THE LAND

The first insect was discovered on Surtsey in May 1964. The discovery of other invertebrates of various species followed. As was expected, these were mostly flying insects to begin with, and they arrived on Surtsey via their own wings and favourable winds. On the one hand, there were species that were carried with northerly winds from Vestmannaeyjar (Westman Islands) or the Icelandic mainland. On the other hand, there were accidental species that were borne to Surtsey with winds from the European continent. Spiders were also discovered soon after the birth of Surtsey, gliding easily through the air attached to spinning threads.

Many insect species floated on the sea surface to Surtsey, either with or without the aid of drifting material. Animals – both dead and alive – have been found on the beach after being washed ashore. There are examples of transportation on floating grass turfs with soil and driftwood that have stranded upon the beach, carrying numerous small animals. In addition, birds have carried small animals to the island.

During the first years in Surtsey’s history, both the arrival of small animals and their efforts to colonize the island were under close inspection. Supervision of the project was in the hands of Carl H. Lindroth, professor of Entomology at Lund University in Sweden. He carried out this research until 1972. Högni Böðvarsson, professor in Stockholm, was on Lindroth’s research team and continued the study of soil organisms until 1978. Erling Ólafsson carried out research on other groups until 1981, when research was discontinued temporarily. In 1995, Peter Gjelstrup from Aarhus, Denmark, and Hólmfríður Sigurðardóttir conducted studies of soil animals (mites and Collembola). In 2002, monitoring of the invertebrate colonization of Surtsey was resumed by Erling Ólafsson and his team.

Development of the Invertebrate Fauna

During the first few years, a total of 170 different insect species were found on the island. This represents approximately 13% of all species found in Iceland until that time. Unfortunately only a few of these species had become established, which is not surprising, as conditions on the island were very harsh and not favourable for colonization for quite a while. When Surtsey was visited in 1981, it became obvious that several species had become permanently established, and these formed an interesting community. In this community there were animals that were herbivores, others that were saprotrophs, and still others that were carnivores. By this time, gulls (great black-backed gull and herring gull) had begun breeding, with a few scattered nests over the island. This developing gull colony with increasing vegetation was the basis for the invertebrate community. Following the establishment of a distinct gull colony in 1985, the vegetation and soil fertility underwent a revolutionary change. Consequently, the invertebrate fauna was affected.

In the summer of 1993, the first earthworms were found on Surtsey in soil samples taken from the gull colony. The worms in question were juvenile chestnut worms (Lumbricus castaneus). Earthworms have not been found there since.

When soil animals were studied in 1995, the vegetation had become very lush in the gull colony and the soil fauna very diverse. Before that time, 16 different species of Collembola had been found, but in 1995 eight species were found, six of which were new to the island. It came as a surprise that only a few of the first species had become established. On the other hand, the diversity of mites had grown, with a total of 62 species in 1995.

In a study carried out in 2002, it became clear that a landmark had been reached in the succession of the invertebrate fauna. Animals were collected in pitfall traps within permanent vegetation plots that had been established on the island. In addition, small flying insects were caught in sweeping nets and collected. In this study a total of 76 invertebrate species were found, half of them for the first time on the island. Soil animals were plentiful, but they have not been identified yet and are not included in this figure.

A total of 300 different species of invertebrates have been found on Surtsey, and approximately half of them have become permanently established. Flying insects are the most conspicuous in the fauna, but among the wingless species there are a few of interest. One is Ceutorrhyncus insularis, a very small snout beetle that feeds on scurvy grass and is an extremely rare species on a global scale. Two land snail species have been found: the Western Glass-snail (Vitrina pellucida), ; and the slug Deroceras agreste. In addition, 10 species of Linyphiidae have been found in Surtsey, six of them in 2002.

Invertebrates found on Surtsey till 2002: 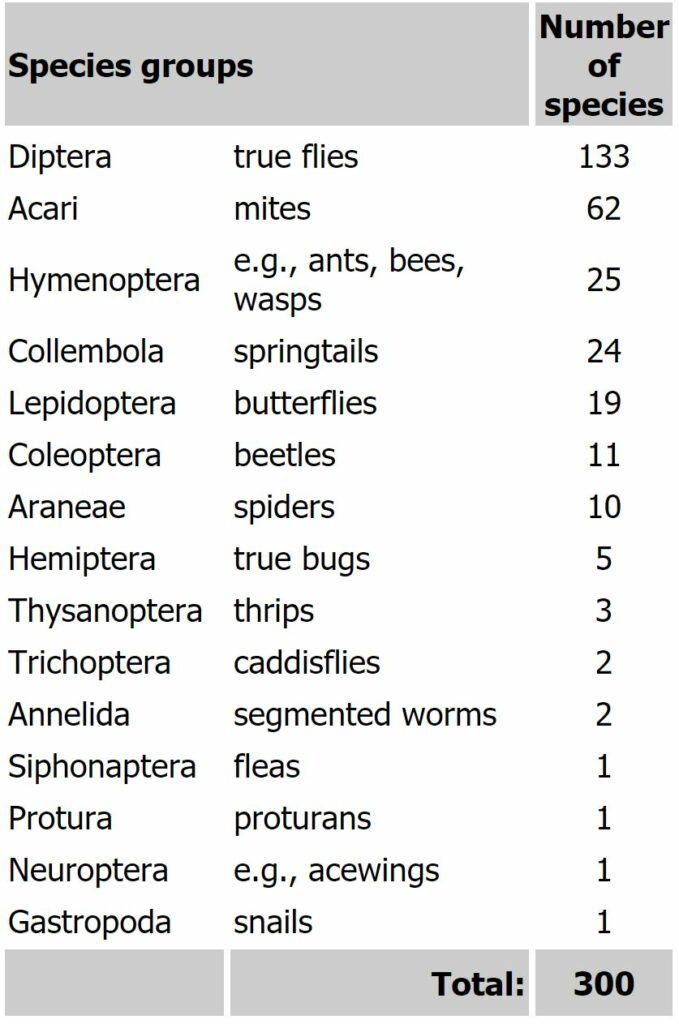