Temperature measurements have been carried out on a regular basis in Surtsey in order to observe the effects that heat has on the consolidation of tephra and to determine at what temperatures the various secondary minerals form, both in tephra and in lava. The lava has partly conserved its heat, especially at the western crater. In the summer of 1986 the gas temperature was still around 300°C at the western crater, but it has cooled rapidly since then.

In April 1968, anomalous temperatures were observed in the tephra, and the measurements from November 1969 indicated that a mild hydrothermal area had formed at the center of the island. The temperature above sea level has risen to a maximum of 100°C (steam temperature) in the tephra layers. Since 1972 the temperature has been slowly dropping.

In 1979 an experimental hole was drilled to a depth of 180 m on the eastern part of the island. Since 1980, the mean temperature decrease in the drillhole has been about 1°C annually. The measurements from 1980 and 2002 are shown on this graph for comparison. In the summer of 2002 a small pool with 78°C water was discovered at sea level just beneath the westernmost cliffs. 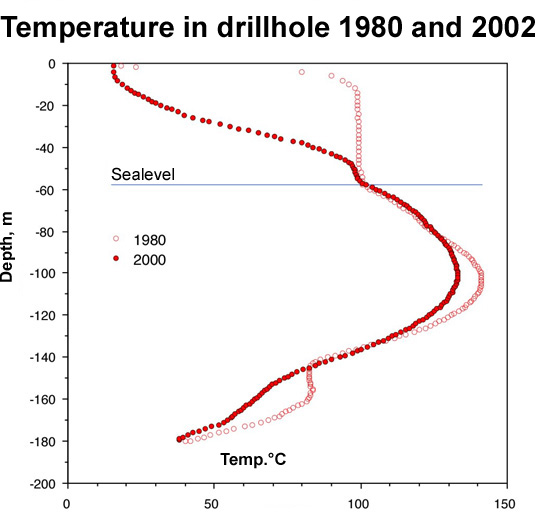 he hydrothermal area in Surtsey is obviously connected to the lava crater and its feeder dikes. It is most likely that intrusions formed in the period from December 1966 to January 1967 are the cause of the hydrothermal activity. The sea water seems to have an open pathway through course strata of rocks at the base of the island. When the ocean makes contact with the hot core, it warms up and the hot water evaporates. The ocean seems to be boiling in some places at sea level, and the steam travels easily through the tephra and lava.